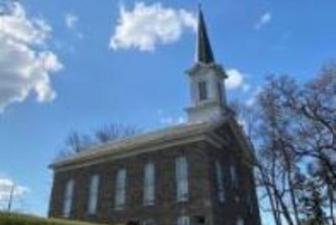 The Riegelsville congregation was organized by Dr. John H.A. Bomberger in 1849 with 29 members. It was admitted to the Reformed Church Classis in May 1850 and chartered under the laws of Pennsylvania in 1890 with an amendment bearing the date 1907.

The town of Riegelsville began as a ferry operation across the Delaware River and grew to include a tavern/hotel, residences and shops as well as a covered bridge by 1849. According to church tradition, the first services were held in 1849 in the original Riegelsville schoolhouse. Rev. Bomberger was the first English pastor of the First Reformed Church in Easton, PA. and was the organizer of services.

The Lutheran and Reformed congregations met in 1850 and determined to erect a Union Church on a tract acquired from Benjamin Riegel (Miller) that also included space for a cemetery. The rubble-stone plastered church was erected in 1850 but was demolished in 1889. It featured a basement used for the Union Sunday School with the worship area above. The entrance to the main audience room on the southern gable-end of the building was approached by two sets of wooden steps on the outside. As of 1861, the Reformed congregation totaled 113 members. A parsonage was acquired in 1866, a frame Greek revival house on Easton Road from the widow of Cyrus Stover.

The two congregations prospered and grew with the town and as a result decided to separate. Prior to that, they had used the church alternative weeks but the Union Sunday School met weekly. The Reformed congregation voted to dispose of its interest in the Union Church in April 1872 and immediately began the erection of the present church on land acquired from Elizabeth Leidy Riegel, widow of Benjamin Riegel (Miller). The cost of the new building and furniture was $15,267.40. The stone was obtained from a quarry in Lumberville, Bucks County, PA. The cornerstone was laid in July 1872. At that time the basement walls were complete, and the joists of the main audience room had been placed in position, making it possible to conduct services.

The Sunday School was organized June 8, 1873, by newly called Rev. R. Leighton Gerhart and grew thereafter. The first communion service was held in the basement on July 20, 1873, with 90 communicants. The first service in the new second floor sanctuary was on October 7, 1873, for the funeral service of Mrs. W.H. Drake, the former Mary E Riegel, daughter of John L Riegel. Services dedicating the completed church building were held Thursday and Friday, October 9 and 10, 1873. At the time of its completion, the interior was finished in smooth white plastering with special decorations including festoons of evergreens added for specific holidays. The congregation met on October 11, 1873, to choose seats and again April 24, 1875, to purchase pew seats via an auction. The pew rents were used to pay the pastor’s salary.

During the pastorate of Rev. J. Calvin Leinbach beginning 1883, the interior walls were frescoed.
During 1887, the congregation erected a new two-story stone parsonage further north on Easton Road at a cost of $5,500. The first occupant was Rev. Ferer. The land had been deeded by John L. Riegel and included the land on which Riegel erected the Riegelsville Academy. The former parsonage and Stover residence was leased to various town residents and later used as a church office before its eventual sale.  The stone parsonage was also sold.