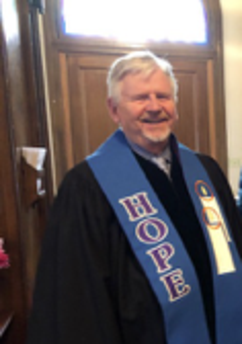 Ken married Lorraine Donnelly of Pottstown, PA in July of 2018 and is now a resident of that city.  He is the father of Jonathan Fuller (Janet Mocarsky) and Martha Fuller Stahl (Bill) and has two grandchildren, Eva and Waylon Stahl.  He is an avid fly fisherman and hunter. A hiker and canoeist, Ken enjoys traveling in the Rocky Mountain states    He is a student of history and literature, with a particular interest in the Civil War.

It's with sadness I am very sorry to inform you of the passing of our Pastor Ken Fuller.  He died suddenly at home last night.  Prayers go out to Lorraine Donnelly, his wife, and his family.
Obviously, Bible Study tonight has been cancelled.  Sunday worship is still on.
The Conference Office has been notified and our Conference Minister, the Rev. Bonnie Bates will be with on Sunday, March 7.
We will keep you informed when funeral arrangements have been arranged.

Ken graduated from Davidson College in 1969, having studied in Montpellier, France during his junior year, and worked on a Kibbutz in Israel one summer.   His seminary training was at Harvard Divinity School.  He has pursued continuing education regularly including denominational programs, and courses at the College of Preachers in Washington, DC, Boston College, at Ring Lake Ranch, from the Alban Institute and the Interim Ministry Network.

He was called to his first pastorate at the Williamstown (Mass.) Congregational Parish, where he was ordained in the United Church of Christ.  Since then, he has served churches throughout New England, as well as in Washington, DC.  In 2014 he became Pastor of Christ Reformed UCC in Cavetown, MD where he has served since then.​